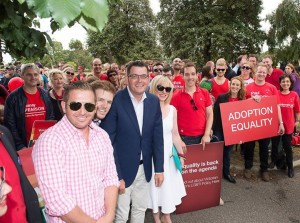 Victorian Premier Daniel Andrews announced that the Victorian Government will introduce laws for Adoption Equality for Victorians regardless of sexuality. The Premier of Victoria, Daniel Andrews announced on his official Facebook page the Labor Governments intent to introduce into Parliament laws in regard to adoption equality in Victoria. Under new legislation it will be illegal for any adoption service to discriminate against couples because of their sexuality.   On his Facebook page, Premier Daniel Andrews said, “Under our state’s outdated and unfair laws, only ‘a man and a woman’ can adopt a child in Victoria. This is wrong. Far too many loving families in Victoria can’t get the recognition and security they deserve. It’s all about to change. We’re making same-sex adoption legal in Victoria – and we’re proud of it. After consulting with Victorians, an expert legislative review has recommended how to change the law to allow adoption equality. We promised to abolish every last bit of discrimination from our laws and we’re doing just that, because under our Labor Government, equality is not negotiable. Every family is different, and the only thing that matters in any family is love.”   Changing the laws to allow same sex couples to adopt was a Labor election promise ahead of the Victorian 2014 vote.